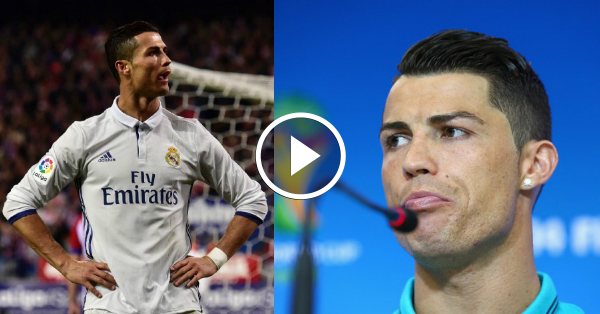 In an interview, Cristiano Ronaldo recently criticised the troublemakers in the Real Madrid audience who have booed and whistled at Ronaldo whenever he was unable to put up a great performance and contribute to the victory of his team. He compared the Madrid fans to the Manchester United fans, and said that they never did anything like that. Ronaldo said that he loves playing for the Spanish club, but he also misses his former team, where his experiences with the fans were different. Ronaldo has never had an experience of being mocked by the Manchester United fans. Earlier in February this year, we all saw how the Real Madrid fans booed at CR7 from the gallery. Evidently, Ronaldo was unhappy about it, and quite rightfully so. Back in February this year, we had seen how the fans booed at Ronaldo from the audience. Ronaldo was evidently unhappy about it. However, this was not the first time that the Los Blancos fans had acted in this kind of an unsporting way. In the previous season, too, they were seen displaying this shameful behaviour, and not just once. In fact, several players like Danilo, Ramos, etc. criticised this behaviour. In fact, several players like Danilo, Ramos, etc. criticised this behaviour. But that did not really stop the trouble-makers. They continued with their rude ways of reacting to Ronaldo in the 2016-17 season as well, until Ronaldo himself reacted to being insulted during a match. You need the extra support from outside and sometimes we don’t get it. It never happened to me in Manchester. The mentality is different. I’m happy with Spain, they love me. But, I also miss Manchester. It stays in my memories. ” It is quite unfortunate that the supporters of the Spanish club do not understand one simple truth – that even the best players like Cristiano Ronaldo are, after all, human beings, and it is humanly impossible for them to turn every day into their best day. There has to be ups and downs in the performance of a player. But, the Real Madrid have not let go of the chances most recently to heckle and insult Cristiano Ronaldo. The player’s ultimate response, of course, was a tight slap on the faces of those people, in the form of two major titles, i.e. La Liga and Champions League.