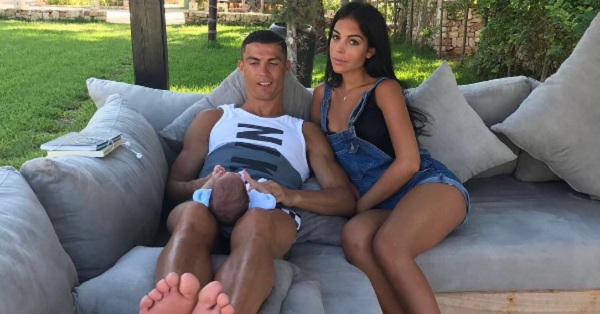 Ronaldo delights his fans every now and the with little peeks into his personal life. And, he just shared the snap of something beautiful. In this nap, he has one of his little boys on his outstretched legs, while his beautiful girlfriend, Georgina Rodriguez, sat by him.

Ronaldo has added the caption, “Lovely Moments”, to this beautiful picture. Ronaldo has a sweet and peaceful smile on his face as he cradles his little boys. Georgina looks stunning as usual, as she sits wearing blue rompers and a trendy pair of white shoes.

Ronaldo has been in a holiday mood for some time now. Ever since his return from Russia after the loss of Portugal in the semifinal of Confederations Cup, he has shared similar moments of joy, happiness and love. He has shared the picture of himself holding his new-born twins after coming back from Russia. Later, Ronaldo showed the world a picture of his eldest boy, Cristiano Ronaldo jr., holding one of his little brothers, while Ronaldo himself cuddled the other boy. It is clear that the Ronaldo boys are happy and enjoying some family time together while Ronaldo stays off the field. Recently, Ronaldo has been holidaying in Ibiza with his girlfriend. Rumours have been around for some time that Georgina is pregnant for a fairly long time. While the couple has not said anything, and Ronaldo’s mother has dismissed this rumour, a family friend has said that she really is pregnant. The images of Georgina captured during their holiday show her in a colourful bikini, as she displays a slight bulge of her belly. This further fed the rumours that she is pregnant, and that it was a baby bump. The two have been enjoying each other’s company amidst the waters of Ibiza.

Meanwhile, Ronaldo’s eldest boy has joined the couple, and it’s a picture of happiness and completeness. The world, on the other hand, is waiting to hear about Ronaldo’s decision about his future. While Ronaldo has reportedly said that he has not threatened to leave Real Madrid, he has not yet expressly communicated to Real Madrid or to the media about his exact plans.

At the moment, the football star is having a good time with his loved ones – something that he very much deserves.