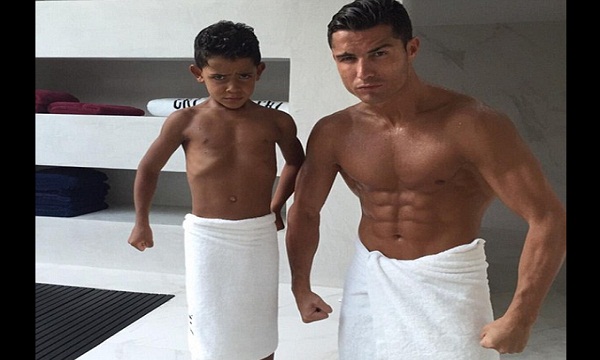 Cristiano Ronaldo is known for his spectacular physique and he doesn’t shy away from showing it. Be it on the pitch, or off the pitch on yacht photo shoot, swimming pool selfies  or just random work out photos. Now it seems like the player is passing on his tricks of trade to his son.

Ronaldo recently posted a hilarious photo of his son and himself striking a pretty cool pose while showing off their bodies, wearing only towels. The photo was uploaded on Instagram and as expected it went viral. In a matter of minutes the photo got more than 200,000 likes on social media website. Ronaldo’s son is only 5 years old and the super star loves to spend time with his son.

Ronaldo is set to start his season on 23rd March in the first LaLiga game of Real Madrid. The player seems to be relaxing and enjoying the pre season time. He has been slowly gearing up his practice and workout routine in order to be ready for the season on time.

One has to admit that recent pre-season selfies from Ronaldo have been quite entertaining for the fans and they also assure that player is feeling quite relaxed before the season.