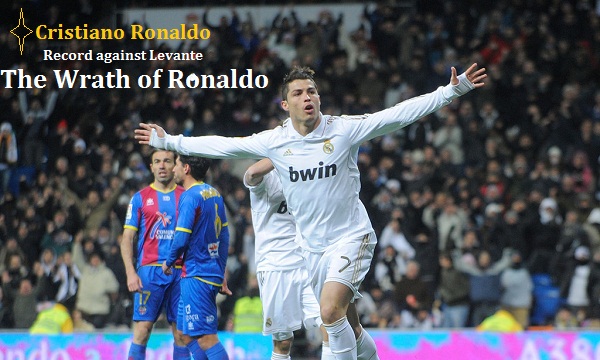 It has been seen on a number of occasions that Roanldo is a very humble and polite person. He makes sure to please his fans by giving them autographs, taking selfies with the, pulling out occasional pranks and doing all sorts of things. He takes time out time from his busy schedule to spend money on charity work and likes to help people. But when it comes to his on field behavior, you will find a beast hungry to rip apart the opposition teams net with his spectacular free kicks, long range shots, penalties or just plain old classic finishes from within the D. And not to mention his breath taking runs and spectacular skills leaving the defenders in dust.

Ronaldo has shown his wrath on every single team he has faced, but Levante is one of the teams who have seen suffered much while facing the beast from Real Madrid. Over the years Levante has proved to be a good target practice for CR7, and he has scored goals at regular intervals. The player boosts a goal scoring ratio of more than 1 goals per game against Levante.