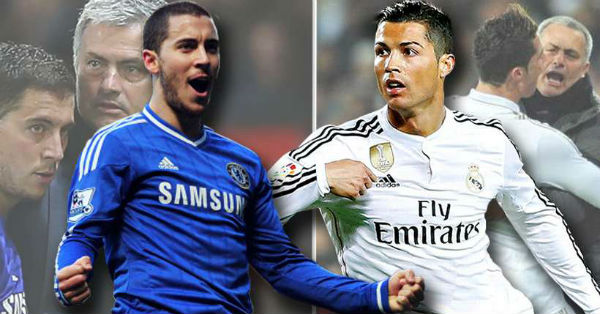 Chelsea manager José Mourinho has denied that he said that Eden Hazard is better than Cristiano Ronaldo.

Eden Hazard, who was the Chelsea’s most impact player in their Title winning campaign and was named  as PFA player of the year last season. While Cristiano Ronaldo failed to inspire Real Madrid as they ended up last season without winning any trophy. Whereas former Manchester United player named as FIFA player of the year for two seasons in the row, José Mourinho previously suggested, Eden Hazard contribution gave him certain edge over Mourinho’s fellow Countryman. At that occasion ex Real Madrid manager said;

“Last season Eden Hazard was better, In spite of the fact of Cristiano Ronaldo was fantastic last season. He scored number of amazing goals.

“I am not saying that Cristiano Ronaldo is not fantastic, but in my personal view, every player in the world should understand that team has to be on front and no titles. While this season, Eden Hazard is struggling to match up with the success of last season, and was dropped to bench in Premier League outing against the Aston Villa, but get a starting notch in the Champions League on Tuesday.

José Mourinho, who has a chance to manage both Cristiano Ronaldo and Eden Hazard has now suggested that, Belgium International has to improve his game in order to be compared with  José Mourinho. He said; “I never said that Hazard has better season than  Cristiano Ronaldo. But, I only said that last season he won one of the most important titles in Football, the Premier League, and his contribution was very decisive, last season he was phenomenal .

Mourinho is not happy with the performance of the Belgium International so far in this campaign and dropped him form the starting lineup against Aston Villa due to lack of his defensive work. While Hazard is yet to score a goal this season, While Cristiano Ronaldo has bagged six goals only in La-Liga.