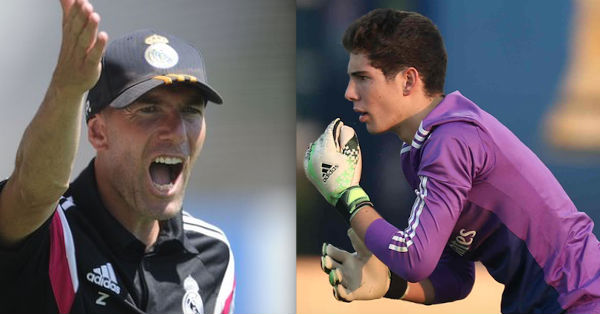 Luca Zidane says that he proud to share his father’s name but he doesn’t like to be compared with Real Madrid legend Zidane.

Luca Zidane is goalkeeper and he is the part of Real Madrid’s youth setup along with his brother. Since their father,  Zidane is the one of the biggest name of the game, who has won World Cup Champions League and European Championships, Luca Zidane and his other brother are the center of huge expectations to make at the top.

While giving an interview to AS Luca Zidane reveled that he become a goalkeeper in order to avoid wide comparisons  with former Real Madrid star, who is considered as one of the best player in the entire history of Football.

“When I hear the Zidane, The first person come to my mind is my grandfather who was a very important figure in our family. Off course I cannot deny that I’m  Zinedine’s son. I am very proud what my father has achieved in his career and to be associated with the name. But I don’t like comparisons with him.

While he was asked why he choose to be a goalkeeper Luca Zidane told;

“Being a goalkeeper means I have yo work hard for myself and there is another reason that no one can compare me with my dad. That is maybe one of the reason why I choose to be.”

Zinedine Zidane joined Real Madrid from Italian side Juventus in a world-record fee of €75 million. During his time at Santiago Bernabéu, he helped Real Madrid to win La-Liga Title and Champions League. Zidane’s left foot volley against the German outfit Bayer 04 Leverkusen in the Champions League final is regarded as one of the best goal in the history of the competition. While along with Messi and Ronaldo he is the only player to named as FIFA player of the years for three times.