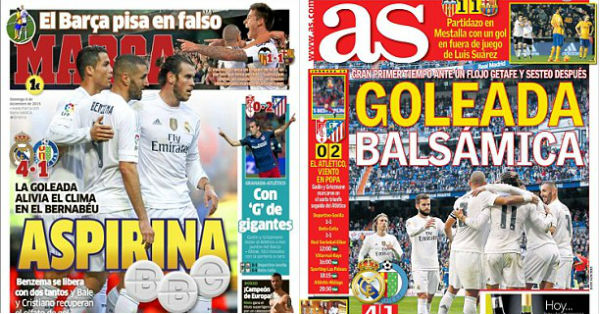 How Spanish press Reacted to Real Madrid win against Getafe?

Spanish press was full of praise of  Real Madrid win over Getafe, as Los Blancos cruised past the visitors with the empathetic scoreline of 4-1.

Rafa Benitez’s side was under the immense pressure following difficult week, which see Real Madrid get knocked of Copa Del Rey after naming ineligible team against Cadiz on Wednesday.

Real Madrid didn’t let their Copa exit to hurt their league aspiration, as their were commanding with their display to close the gap on Barcelona, who drew with Valencia 1-1 away from home. Former Liverpool boss was feeling the heat after Real’s 4-0 humiliation in the first El-Clasico of the season, which widened the gap to six points from the top, while Copa Del Rey blunder further escalated the situation. Anything less than win could have pile more misery on already under pressure Rafa Benitez, nevertheless Real Madrid was on the top of their game and showcased one of their best performance of the season. Their last league win against Eibar was far from convincing, however on Saturday they were in the full control of proceedings. French International  Karim Benzema, who was enduring difficulties off the pitch for his alleged involvement in Sex tape scandal, provided much needed spark in the Real Madrid attack. The former Lyon scored opening two goals for the home side, followed by goals from Welsh International  Gareth Bale and Cristiano Ronaldo before the interval.

Spanish press which was highly of  Rafa Benitez’s men in recent weeks, hailed the display of  Los Blancos and called it painkiller for former Liverpool manager.

Madrid based Marca, applaud the performance of  Karim Benzema,  Gareth Bale and Cristiano Ronaldo and called them  ‘Aspirin BBC’, and suggested it will help to calm things at Bernabéu.

AS hailed the display of the Real Madrid, and claimed that win will give Rafa Benitez breathing space.