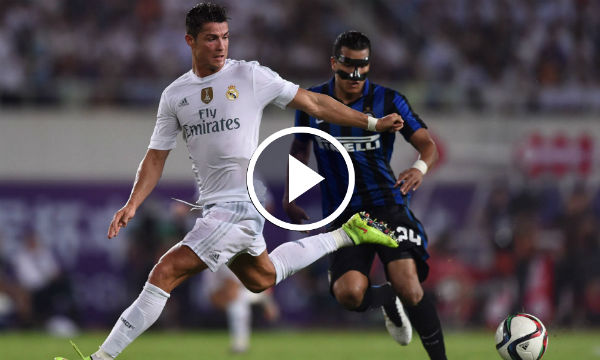 Real Madrid was seen in their third match of the International Champions Cup 2015. After their sudden loss against Roma and a good win against Manchester City, the team was up against Inter Milan in this match. Before the match began, it was suspected that Real would be making three changes to their side that had faced Manchester City, with Danilo replacing Dani Carvajal at right back, Casemiro replacing Luka Modric and Jese Rodriguez replacing Karim Benzema. Ronaldo, on the other hand was expected to play through the middle for Los Blancos.

The match started once the two teams gathered on the field, and 2 minutes into the game, Real was seen taking control. Bale had the chance to open his legs down the left, but Welshman made a cross that was too strong for Ronaldo. Inter got a half-chance in the early moments, with Hermanes delivering a dangerous cross to Icardi, but the he somehow missed the header, and Real managed to clear, with just a slight touch.

In the 5th minute, Jese delivered a super cross onto the head of Bale, but the efforts of Welshman was at Handanovic. Bale then collected a through pass from Isco, but dragged his wide of shot wide off the post. After this chance, the next one for Real came in the 11th minute, with Ronaldo bursting into the Inter box. However, the attacker’s low strike was saved by Handanovic. Several late challenges were seen, and the referee was seen more involved in the game than he would probably like.

Soon, Icardi combined with with Kovacic outside the Real Madrid box, and showed some good stuff, but the return pass was too strong.  In the 15th minute, Ronaldo made a beautiful dipping free kick, but it was saved by Handanovic. Inter and Real locked horns again, as Ronaldo made yet another attempt, but it was too wide off the mark. 20 minutes into the game, and no goal was made, though both the teams went strong. Handanovic showed some power goalkeeping as he made a double save as he stopped Isco’s shot towards his box, and then rose up to deny Jese. But, he finally failed to stop Real when, within about 5 minutes, Jese made the first goal of the match.

For the next 15 minutes, the two teams went on with full on energy, and even though Real had another wonderful opportunity to score, no more goal in the first half of the match. 4 extra minutes were added to it, after which the scoreboard read Inter 0-1 Real Madrid.

After a smart finish by Jese before the half time, the second half started soon. And, within about 3 minutes, Real came close to scoring a second goal, but that did not translate to the scoreboard. In the 53rd minute, Hermanes was booked for a late challenge on Marcelo. 3 minutes later, Real scored its second goal, with Varane netting the ball. Again, in the 65th minute, Jesus from Inter got booked for dissent. With a little over 15 minutes left of the game, the two teams seemed to be bringing the heat on, and literally a couple of minutes before the end of the match, Rodriguez scored the 3rd goal for Real.

Arbeloa got booked in the last minute for a late challenge on Iturbe, and after 3 additional minutes, the score board real Inter 0-3 Real Madrid when the referee brought the second period to a close.