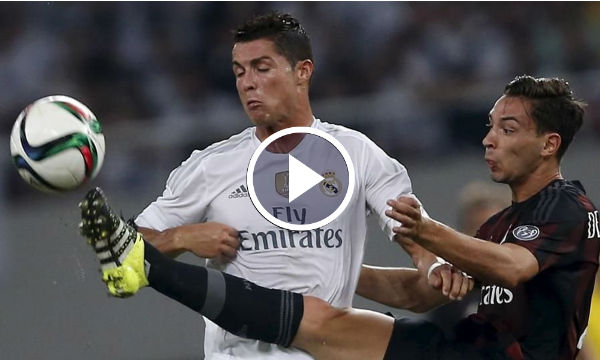 Real Madrid came face to face with AC Milan on 30th July in the International Champions Cup of 2015. A large amount of anticipation revolved around the Real Madrid vs AC Milan match, with the fans of both the things placing their expectations upon the teams. AC Milan got the action underway as the match began, and within only 4 minutes, Luca Antonelli made the first chance at the box past a couple of defenders. But, Navas was quick to stop him. Antonelli caught the attention of the referee, soon, with a late challenge on Lucas, and Real got their first free kick at the 9th minute inside their own half.

Bale was suddenly seen making a burst through the middle during the Real Madrid vs AC Milan match, but his stalled run allowed Suso to grab it back for Milan. As Vasquez wove his way to the edge of the Milan box, he won Real’s first corner of the match. Though Modric curled it in, it was easily headed clear by Alex.

As Real continued to enjoy majority of the possession during the Real Madrid vs AC Milan match, Ronaldo started to get himself more open. However, he lost footing on the edge of the box just when he started to look like he was going to get a shot away. By the 30th minute of the match, Real was showing more intent in the Milan box. 37 minutes into the game, and Ronaldo suddenly added an injection of pace through the middle after which he backheeled the ball to Danilo, who crossed the ball to Benzena. Benzena’s shot, however, was wide off the mark.

Yet another chance was opened for Real in the 40th minute, as Niang showed some immense pace. However, he lost his footing, and even though 3 minutes were added to the first half, no goal was scored. At the end of the first half, the score board read Real Madrid 0-0 AC Milan.

Real Madrid got the second underway, and there were changes seen in both the teams. 51 minutes into the game, Jese came close to setting up the opening goal, but the ball got deflected for a corner. Mauri conceded a free kick just outside the box, and Kroos curled in. This Real got a free kick in a dangerous position. Bale tried to make a curl, but the ball didn’t curl enough, and Lopez at the Milan box remained unperturbed.

At the 8th minute of the game, Ronaldo got the best chance of the match, as he leapt high to nod the ball to the bottom of the net, but Lopez did a fantastic job kicking the ball off the line. But, this was not the end for Real, as they kept getting several chances to net the ball with the first 15 minutes of the 2nd half. Real’s power play continued till the 70th minute, even though it did not translate to a goal, after which Ronaldo gets replaced by Denis Cheryshev. But the attacks continued, though without any change in the scare board.

The struggle continued till the 90th minute, after which 3 minutes were added, and Marcelo was seen trying to make a final push for Real, but Milan was not ready to take chances, as they brought in replacements. However, none of that made any change for either of the teams during the Real Madrid vs AC Milan match, at the end of which, the score board read Real Madrid 0-0 AC Milan, leading to the penalty shootout.

The teams began shooting and netting the ball, until Carlos Bacca missed AC Milan’s penalty shot in the 3rd round, leading the score to Real Madrid 3-2 AC Milan. Luiz Adriano brought the score to level terms as he picked out the bottom left, and the score read 4-4. The shootout was kept alive for the next few rounds as the score continued to be level. However, as Casilla scored the tenth penalty for Real and passed the ball to Milan, Donnarumma couldn’t score with his spot kick while trying to mimic Casilla, and Real keeper blocked the ball. Thus, the match ended with Real Madrid winning with 10- 9 on penalties.