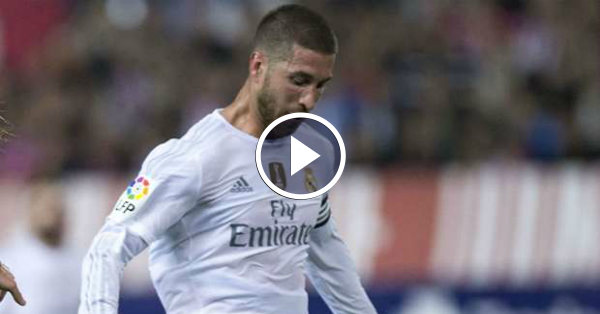 GOAL! Ramos scores an equalizer for Real Madrid against Villarreal!

Minutes after the start of the second half of the Real Madrid vs Villarreal match, Sergio Ramos scores an equalizer for Real Madrid against Villareal, giving Los Blancos fans some new hope!

When Zidane spoke at the press conference before the La Liga match, it seemed that the team has treating Villarreal as a weak opponent. However, the game proved to be different from what the Los Blancos fans – and probably the entire team – had expected. Even though Real Madrid enjoyed most of the possession, Villarreal had their moments, too. As the match rolled on towards the end of the first half, after several attempts and saves, Villarreal began to catch up. Just as the first half was about to come to a close, a minute after an injured Marcelo left the field, a great chance came for the guest team to score, with Sansone breaking into the home team’s box before he fed Cheryshev. But, it fell through because Ramos somehow made a last-ditch tackle, and that too inside the box, thus earning himself a yellow card, and gifting Villarreal a penalty. Villarreal took the advantage, and scored the first goal of the match.

The second half of the match began, and Real Madrid went at it with full force. The result was seen in the 48th min of the match. After enjoying a good amount of possession, Real Madrid managed to go past Villarreal’s defence. James Rodriguez sent a wonderful corner to Sergio Ramos, who headed the pass straight into the opponent’s box.

Real Madrid continued to dominate since the equalizer, though Villarreal’s repeated challenges on the Real Madrid players, combined with good goalkeeping, kept the ball away from the Villarreal box, even though Real Madrid definitely deserved a second goal, what with the excellent efforts by all the players, mainly Cristiano Ronaldo.

GOAL! Ramos scores an equalizer for Real Madrid against Villarreal!