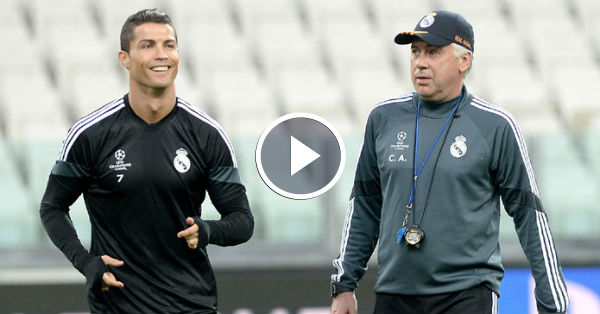 Former Real Madrid manager Carlo Ancelotti claimed that  it was very easy for him to manage  Cristiano Ronaldo.

The  Portugal forward is often accused of being arrogant and difficult player to handle, however the former Chelsea boss revealed it was pleasure to manage player like Cristiano Ronaldo. The three times Ballon d’Or was unhappy with the sacking of Carlo Ancelotti, as he enjoyed his best campaign under Italian.

Reportedly, former Manchester United star has been fallen out with current Real Madrid manager Rafael Benitez, as he was not fully convinced with the playing style of Spaniard, and has warned Perez ” they will not win anything under him’.

Carlo Ancelotti feels the key to mange top players with the likes of  Cristiano Ronaldo and Zlatan Ibrahimovic you have to keep close relationship him, as Italian coach was sharing his own experience.

Speaking to the Independent he said:

“The owner or president is the person who controls the club and the coach’s job is to keep him happy, but the key to success, as a manager, is your relationship with the players. “Important clubs and important players succeed when the environment is correct. The players must enjoy their work and feel free to express their talents. This is my approach.”

“I have worked with some of the most important players, like Ronaldo, Ibrahimovic, Kaka, [Zinedine] Zidane, but the best are easy to work with because they are so professional. “It does not mean I do not have to be strong in some aspects of my job. But this is my style and I feel good about it.