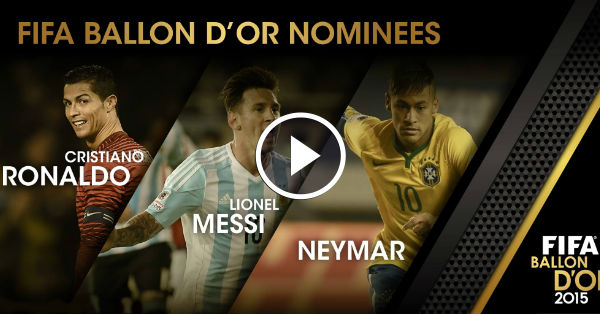 FIFA has revealed the three-man shortlist for the 2015 Ballon d’Or on Monday, Barcelona pair Lionel Messi and Neymar has made the cut along with Cristiano Ronaldo from 23 names.

Barcelona ace Lionel Messi is red-hot favourite to win FIFA player of the year, after leading the charge Spanish heavyweights treble winning campaign last season, which give him visible edge over Cristiano Ronaldo. The Real Madrid star who won  2014 Ballon d’Or has netted 48 goals for club and Country for this term, but not winning any piece of silverware could hurt his chance to make it three Ballon d’Or in a row. Brazilian International Neymar will share Ballon d’Or stage with long term competitors Lionel Messi and Cristiano Ronaldo, after extravagant display in last term and has been in rich form this season. The former Santos formed a formidable partnership with Argentinian International and Luis Suárez, as he scored 10 goals to play his part in Barca’s Champions league success. While he was equally effective in the La-Liga, with attacker netted 22 goals in last campaign. Neymar has been in incredible form this season, and he is the top scorer of the Spanish top flight with 14 goals. Meanwhile it will be sixth time in the row that no player from the Premier league has been selected for final three man shortlist.

Barcelona head coach Luis Enrique is the strong contender for 2015 World Coach of the Year after guiding his side to Champions League, La-Liga and Copa Del Rey title in his first season of charge.

Former Real Madrid manager Jose Mourinho has will compete with Luis Enrique and Juventus’s boss Massimiliano Allegri for the  World Coach of the Year award.