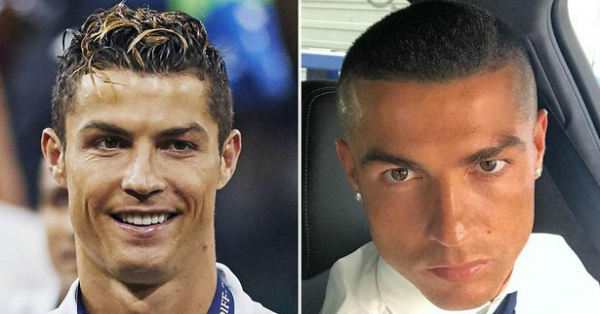 Fans Hate Ronaldo Haircut, But He Has A His Reason For Skinhead Style!

Cristiano Ronaldo has recently had a trim of his hair and, if the responses of the Twitterati is something to go by, his hairstyle game has gone downhill. There have been some really negative responses about it. Ronaldo has played what is without a doubt his best season, winning the Champions League with incredible ability to entertain. Yet, some say the loveable maestro should not have given up his signature blonde stroke curls. His new hair style is a buzz cut with clean shaved sides.

Fans Hate Ronaldo Haircut, But He Has A His Reason For Skinhead Style! Ronaldo has always been fearless about sporting the most unique hairstyles. It has gone from bizarre and bold to suave and sophisticated. Fans wait for him to start a new hair trend in every season. This time, after his two-goal contribution to his team’s win against Juventus in the Champions League final to secure the title, Ronaldo dicided to arrive at the celebrations in his new look. He was seen in the Real Madrid team vehicle in a suit and scarf, and finally revealed a skinhead look.

He also posted a picture of himself on Twitter in his new haircut, asking for opinions from his fans. And, that’s when it all started. There was a storm of negative reactions to his new look. While some compared him to Barack Obama, someone said he looks like a “sales associate at Express or a waiter at your favorite Mediterranean restaurant”. No matter what the critics on Twitter have to say, Ronaldo has a touching reason behind the haircut. He actually made a promise that if Real Madrid would win against Juventus, with one goal by him, then he would get this goal. So, after Real achieved the said win, and Ronaldo managed to score not one but two goals in the match, he got this haircut. In any case, Ronaldo has been totally rocking the look, and carrying it with oomph and confidence, as always!