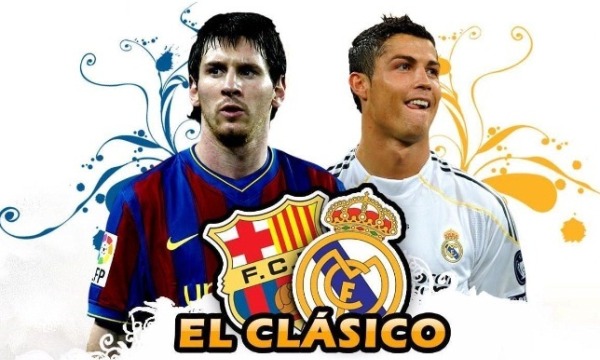 El Clasico Preview: Barcelona or Real Madrid- Whose side are you on?

Two of the greatest sports rivalries will be seen battling it out when FC Barcelona and Real Madrid will come face-to-face at Camp Nou on Sunday at 9.00pm CET. The fans are looking for the rare chance to see Ronaldo and Messi playing against each other on the greatest derby El Clasico. Star-studded Real will meet the star-makers FC Barcelona to give a ground to the never-ending battle between Ronaldo and Messi for the status of the world’s greatest player. The clubs are at the top two positions of the Liga BBVA at FC Barcelona with 65 points and Real Madrid with 64 points.

A headline saying, “Going up, going down” was published on the cover of the Catalan sports daily “El Mundo Deportivo” this week, along with the pictures of the pair who defines their teams. The match will be of full-on adrenalin rush for being the battleground of the symbiotic relationship between both the teams. Whatever will be the result, the clubs and the player LM10 and CR7 will always remain in the special place at the heart of every soccer fans. Xavi Hernández once also stated about the El Clasico that the teams are actually “like two sides of a scale,” and added, “They cannot both be up at the same time, even if both are playing well.”

Many football pundits predicted the match result and gave their verdicts. Graham Hunter said it will be a 3-2 win for Barcelona while saying “Real Madrid aren’t as poor as the Schalke result suggested and the return of Dani Carvajal, Marcelo, plus Sergio Ramos and Luka Modric means they’ll be competitive. But I’d take Barcelona to have more stamina and more goals in them. I fancy a late winner. Luis Suarez, of course.” Rob Palmer, on the contrary, said it will be a 3-3 draw while stating, “As always, it’s billed as Messi v Ronaldo! However, this year I suspect it will come down to the supporting acts. The two superstars will get special marking so watch out for ex-Premier League stars Suarez, who is back to his best and Gareth Bale, who is silencing critics and upstaged Ronaldo last week.”

Cristiano Ronaldo at the Ballon d’Or ceremony in Zurich on 12 January received his third Ballon d’Or for his last years performance while another greatest was sitting in the front row, a runner-up Lionel Messi. Ronaldo called Messi to meet his son before the Ballon d’Or event and said, “This is the eighth time I have been here and it is always Messi and I and one other player,” and added, “I’m sure the competition between us motivates him too. It’s good for me, good for him and good for other players who want to grow.” Before today’s El Clasico, two teams came to a face off in last year’s October where Madrid defeated Barca with 3-1 which is the first time they had defeated Barcelona by more than one goal in six years. CR7 Ronaldo had scored on that day while LM10 Messi had not.

If we talk about Messi, Pep Guardiola showed a child-like reaction while watching the performance of Messi against Manchester City. Javier Mascherano after the City match said, “Football controls us all but Messi controls football. He is a legend, doing things mere mortals cannot aspire to.” He has now scored 32 goals and provided 14 assists in the league, plus a further 55 assists which was not taken by team-mates. Messi, in 2015 itself, has scored 20 goals alone and while talking about his recent form stated, “It turns out that I have gone from being a disaster to being in my best moment.”

Ronaldo, on the other hand, is now standing at the goal table with 9 and is now going with a little setback of his form. It seems the angry outbursts are the result of his current form. Recently CR7 was sent off for kicking and slapping Cordoba’s Edimar. There are doubts about his fitness and happiness but no one can predict anything, since he might be the god himself, but he will play the match with a bad temper. Everyone saw CR7 in anger, even after scoring two goals as the team collapsed around him in the match where Madrid were beaten 4-3 by Schalke. It is almost impossible to get feedback from his side before the El Clasico as he announced that he would not talk for the rest of the season with the media. His long time teammate Sergio Ramos, while explaining about the CR7’s recent bad mood, stated, “He’s used to scoring 60 goals a year and when he gets 40 he’s not happy – he has a very competitive character.”

Carlo Ancelotti said, while talking about his stand before Madrid’s crucial Clasico against rivals Barcelona, “I do not feel as though my future is on the line,” and added, “This is just an important game for Madridistas. It is the same for Barcelona. Both teams have a global image to live up to and have to give a good impression.” Ancelotti also said “The atmosphere in the dressing room is different because this is a special game. We are playing a great side at an important moment of the season” while adding “But this match won’t be as decisive as the Champions League tie against Atletico.”

FC Barcelona coach Luis Enrique, while talking about the match against Real Madrid, delivered quite a similar reaction and said, “There are still 10 games to go and there are too many difficult games for both teams, so it is not decisive but important” and added “There is a lot at stake and the two teams have players that are out of this world.” On the other hand, Barca’s star Luis Suárez said it will important to make the fans happy on Sunday, and added, “I never imagined playing in the Clásico.”

In a head-to-head tally between these two teams, Barcelona is leading the El Clasico on paper as Luis Enrique’s side are in irresistible form. Barcelona won 17 of their last 18 matches in all competitions and Messi bagged 20 goals in his last 17 appearances. On the other hand, Real will also have a very good grip as their Welshman Gareth Bale ended his nine-match goal drought last weekend. The return of Luka Modric will also play an advantage for Real as the Los Blancos have severely suffered in midfield in his absence.

Sports fans are currently waiting for not just a match but an absolute battle on the football ground. They have chosen their own teams to support, and are divided into camp Barca and camp Real, ready to grab each other by the throat. The match will be a cut-throat one. Stay tuned for match further reviews and analyses.