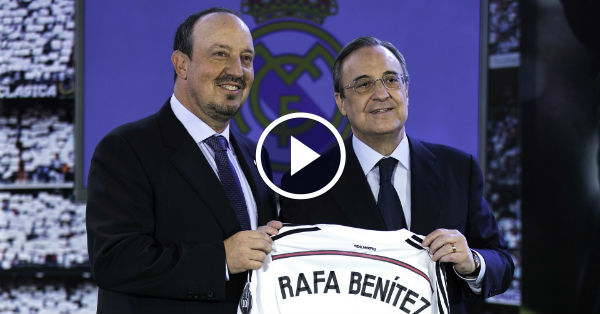 Florentino Pérez has said that Real Madrid will not sack Rafael Benítez, and offered his backing for under fire boss while he denied the reports of  selling their star man Cristiano Ronaldo.

Real Madrid called press conference last night, in wake of 4-0 defeat against the current La-Liga Champions Barcelona, with reports surfacing that  Florentino Pérez has made up his mind to sack the former Liverpool manager. However Real Madrid President plead with fans for unity, after math of crashing in the El-clasico which left them six points adrift from the top.

The Press Conference After El Clasico:

Following Saturday’s loss home fans protested against Florentino Pérez, and also booed out of the form Cristiano Ronaldo. Before the game there was also reports that former Manchester United star and rest of the senior members of the Real Madrid squad are unhappy  with the playing  tactics of  Rafael Benítez. While addressing to the press Real Madrid Chief claimed that he have the full support of boardroom and dressing room:

“The solution to this is Rafael Benítez. We think he is the right person, but we let him must work and not listen to those who making up the lies that board does not want him, or the player don’t want him.

“He has the good relationship with players, with the board,and me in  particular. We understand the anger of the fans, but ask for supporters for our players.” “It is not habitual for us to be permanently denying the things,” Florentino Pérez  said, “but some journalists want to destabilize us. There are people who make lying their reason to be. All they want is to damage Real Madrid. Never has Cristiano Ronaldo  has said to me, with the coach, or the club, we will win nothing. He has never said anything about anyone, he is the good guy.”