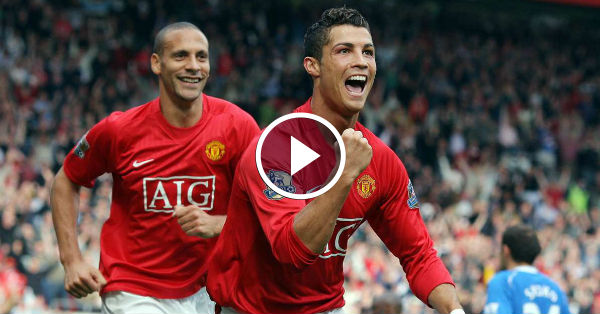 Manchester United Legend Rio Ferdinand has revealed that Cristiano Ronaldo was embarrassed about his wayward shooting, at the start of his Old Trafford career.

While speaking to England Under-16 squad, former Red Devils defender lifts the lid over the early days of Cristiano Ronaldo at the Manchester United. Rio Ferdinand talked about the mentality of  Portuguese International as a teenage sensation, when he first arrived in England.

After joining Manchester United from his boyhood club Sporting Lisbon,  Cristiano Ronaldo become one of the best player, and Ferdinand believes it was the dedication and the hard work of the current Real Madrid superstar made him the player today he is.

“He didn’t have a great shot when he came. He had a powerful shot but it went everywhere. He used to go out after training, he was embarrassed. “He used to have a bag of balls and went to a pitch right over the other side so he could hide behind the trees.

“It was ‘Ronnie, where you going man? I’m just going over there.

“What’s wrong with you?

“But after a few months it was ‘oh he does shooting, does stepovers’. He used to put weights on his feet and do these stepovers. “Are you mad, what are you doing?’ Until he started bamboozling people.

“You get to the stage where he’s flying with Man United but it ain’t enough. He wants to be the best. He ain’t getting the ball and doing all these mad tricks all the time, he wants efficiency, he wants goals, assists, that’s all he cared about.”

Cristiano Ronaldo spent six seasons with Manchester United, before leaving for Real Madrid in 2009 in the World record fee. The Real Madrid top scorer has been linked with the Old Trafford return  in the summer.