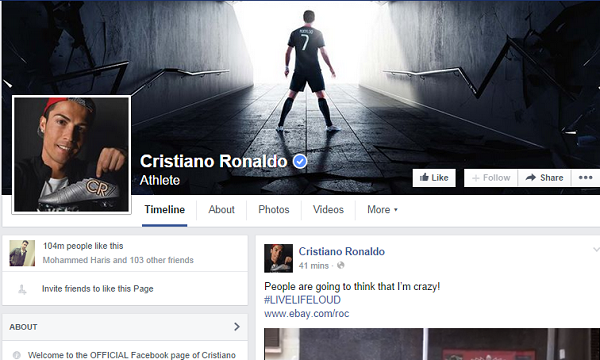 Cristiano Ronaldo the most popular sports personality on facebook: Cristiano Ronaldo has fans form all over the world on his Facebook page and the amazing thing is that the popularity of the player is still increasing with hundreds of thousand of fans joining his Facebook page every month. Just to get an idea of how quickly the Facebook Page of Ronaldo is growing, You can go to his official Facebook page and check the number of likes and after couple of seconds refresh the page, you will see 10s of new likes added within a few seconds.

The Facebook page of Cristiano Ronaldo is managed very professionally on his behalf and is used for all sorts of stuff related to Cristiano Ronaldo. The page is used to keep the fans updated with latest activities of the player. It is also used quite frequently to promote the Cristiano Ronaldo’s own brands of underwear, t-shirts or formal shoes. With hundred million fans the page has become a great marketing tool for the player and his sponsor Nike as well.

After looking at the amazing performances year after year, the persona, the glamour and the huge fan following around the world one should not be surprised that Cristiano Ronaldo is the most popular sports personality on Facebook.