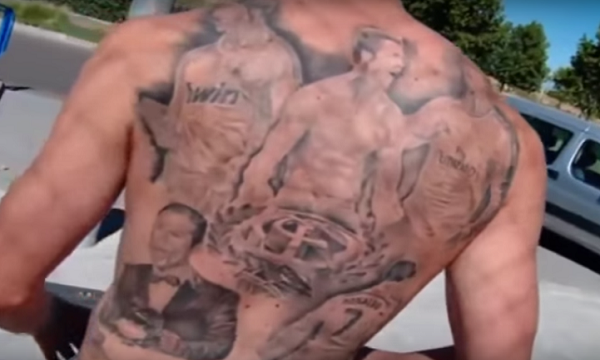 Cristiano Ronaldo super fan gets huge Ronaldo tattoos on his back Being the best football player in the world means having hundreds of millions of fans around the world. And some of those fans can be quite die hard. They try to copy your style, football skills, haristyle, clothing and everything. While this is the case with usual fans. One Cristiano Ronaldo fan has gone a step further and perhaps to show that he is the biggest Ronaldo fan in the world, he has got his entire back tattooed with 5 portraits of CR7.

The super fan of Cristiano Ronaldo showed up outside the Real Madrid training facility and took off his shirt to show the Ronaldo portraits. There were 5 different portraits of Ronaldo which were beautifully crafted on the back of the obsessed Ronaldo fan. The name and other details of the fan are still unknown. However, he was captured in video, taking off his shirt and showing the tattoos.

Earlier, news of another super fan of Ronaldo went viral when a teenager reportedly spent several thousands of pounds in order to look like his idol. This just goes to prove that the extreme fan following which Ronaldo has is a one of a kind and no other footballer enjoys such level of support.