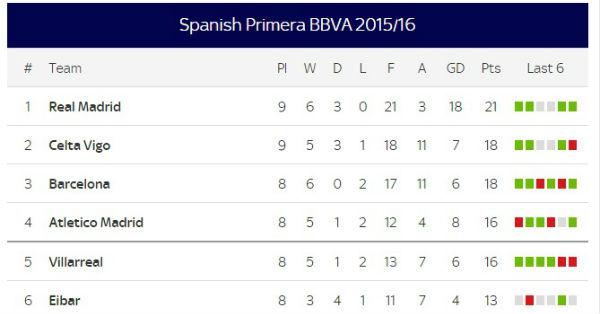 Cristiano Ronaldo scores his 12th goal of the season to inspire Real Madrid to win 3-1 as they end the unbeaten run of Celta Vigo away from home on Saturday.

Cristiano Ronaldo opened the scoring for a visiting side and Brazilan Full back Danilo doubled the lead of Real Madrid inside the 23rd minute at Balaidos Stadium. While Real’s  Costa Rica goal-keeper Keylor Navas pulled off number of key saves to keep their lead intact. Any hope of Celta Vigo comeback become even more difficult, with home side found themselves ten men down as Gustavo Cabral left the pitch after earning second yellow in the 57th minute. Despite with a disadvantage of one man down, hosts puts pressure on Real Madrid. Spain attacker Nolito pulled a goal back for Celta Vigo in the 85 minute of the game, Real Madrid had to held they nerves with Celta almost score an equalizer in the closing stages of the game. But  Marcelo scored  back to back in two La-Liga outings to rescue two goal leads for Real Madrid just before the final whistle. Rafa Benítez’s side had to do it with number of keys players, with Real Madrid record signing  Gareth Bale, French striker Karim Benzema James Rodriguez out injured, while midfielder Luka Modric makes his comeback to starting eleven. Saturday’s victory over Celta Vigo has sent Real Madrid at top of the table with 21 points, while hosts suffered first loss of the Season which means Real Madrid are the only undefeated team in League in 2015-16 campaign. Real Madrid are three points clear off Barcelona, who will play Eibar on Sunday, with Celta Vigo are currently level with defending Champions with 18 points.

Real Madrid midfielder Casemiro was happy with result, while talking to media he said

“We have  a good result because we know difficult is to play here.