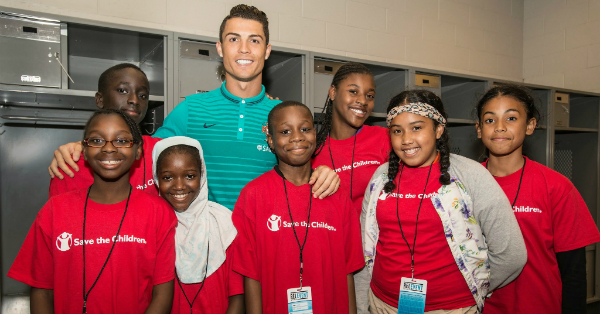 Answer for those who says “Ronaldo is Selfish” Many people had said that Cristiano Ronaldo, the star striker of Real Madrid is a selfish player but the facts contradicts these opinion. We are going to represent you some facts and figure which will be an answer for those who believed in this. A person who have pain for other in his heart cannot be a selfish. He will play for his team, for his nation not only for himself or just for money. He is a kind heart person who helps the needy and the victims. A person kind and generous in his life cannot be selfish in the field. Here are some donation and charity that Ronaldo had done in the past:

1: Donation of 1.5 million euros for the children of Gaza

The great star of Real Madrid has donated €1.5 million for the construction and rehabilitation of the schools in Gaza, Palestine. This news was revealed by an Arabic site. Ronaldo gave his golden boot earned by him in 2011 to Real Madrid Foundation. The Foundation sold the boot in an auction and dedicate the money for the betterment of schools in Gaza.

2. Ronaldo donates €60,000 to a child for cortical dysplasia’s operation.

3: Donation of UEFA check to International Committee of the Red Cross (ICRC)

Cristiano Ronaldo and UEFA gave 100,000 euros to support International Committee of the Red Cross for the physical rehabilitation programme in Afghanistan for the people who were the victims of land-mines.

4: Ronaldo has no tattoo on his body because he often donate blood

Ronaldo do not have any tattoo on his body, he explain the reason by saying that he often (twice in a year) donate blood. He also donate bone marrow to the son of his teammate. He said that “It doesn’t cost anything, it’s a simple process and then you feel happy because you know you are helping another person.”

Cristiano Ronaldo also remained evolved in my other social activities like visiting cancer hospitals, donating his belongings for other. He prove himself a kind human being by is generosity and maturity towards the social issues.