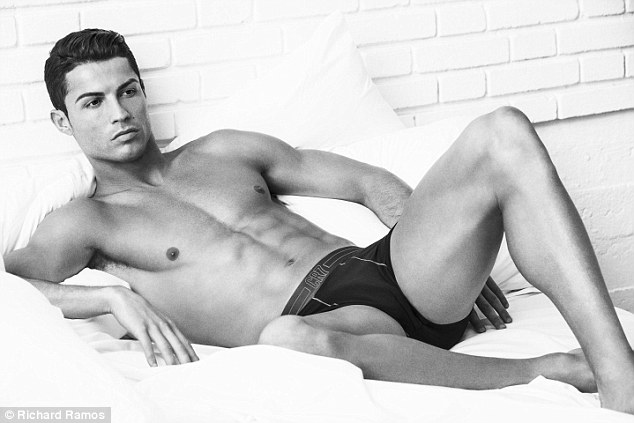 Cristiano Ronaldo has once again put his muscular frame on display as he models the latest addition to his underwear range.
The footballer proved there is no better physique to showcase his new Microfiber styles as he posed for a series of smouldering black and white images.
Ronaldo channelled his inner David Beckham as he revealed the black and white styles made from the premium fabric.

The 30-year-old certainly oozed body confidence – and with good reason – as he worked the lens with ease, displaying his oiled rock-hard six-pack abs, toned shoulders and athletic thighs while lying down on a bed.
The multi-talented sportsman collaborated with award-winning New York-based designer Richard Chai once again after launching the CR7 brand back in 2013.
The striking pictures will no doubt help to sell underwear to men across the world, but may also serve as a reminder to his ex-girlfriend Irina Shayk.
Cristiano and Sports Illustrated model Irina ended their five-year romance in January, and shortly after the Real Madrid star confirmed it was over.

He said: ‘After dating for five years, my relationship with Irina Shayk has come to an end. We believed it would be best for both of us to take this step now. I wish Irina the greatest happiness.’
Rumours surfaced that their relationship was in trouble when she failed to support him in Zurich when he was awarded the prestigious FIFA Ballon d’Or award in January.
The famous footballer recently scored his 300th goal for Spanish football club, Real Madrid, during their 2-0 victory over Rayo Vallecano.
Ronaldo managed to reach this impressive total after 288 appearances in six seasons for the famous Los Blancos.
It is safe to sat that he has well and truly made his name as a legend at the Santiago Bernabeu, only trailing Raul and Alfredo di Stefano in the club standings.
He has so far claimed two FIFA Ballon d’Or awards during his time in Spain, as well as glory in La Liga and the Champions League with the team.