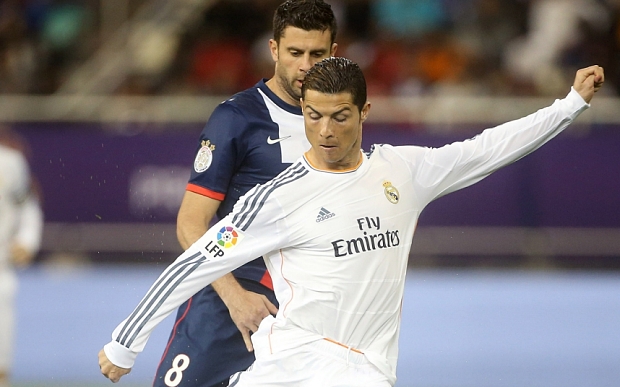 Marcos Pizzelli scored from a free kick for Armenia in the 14th minute, but Ronaldo converted a penalty to level in the 28th.

The Ballon d’Or holder then added two more goals in the 55th and 58th minutes to secure victory and keep Portugal top of Group I.

Portugal’s Tiago Cardoso was sent off with a second yellow card in the 62nd minute, and Hrayr Mkoyan scored the hosts’ second goal 10 minutes later.

Portugal top the group with 12 points, while Armenia were left in last place with one.

Bayern Munich striker Robert Lewandowski scored a hat trick in the last four minutes to lead Poland to a 4-0 victory over Georgia that left the Poles in control of Group D.

Lewandowski scored in the 89th minute and added two more in stoppage time.

Also in Group D, Scotland rallied to earn a 1-1 draw with Republic of Ireland in Dublin.

Jon Walters scored for Ireland before Shaun Maloney’s strike was deflected in by John O’Shea.

Poland have 14 points from six matches and will remain atop the group regardless of the outcome of Germany’s match against Gibraltar later on Saturday.

Germany have 10 points and will rise above Scotland with a win over Europe’s newest team. Scotland have 11 points, Ireland nine, Georgia three and Gibraltar none.

In Group F, Zoltan Stieber scored in the 82nd minute to lift Hungary to a 1-0 win away to Finland.

Hungary widened the gap to their fourth-placed opponents to seven points in the group and kept the pressure on the top two — Romania and Northern Ireland.