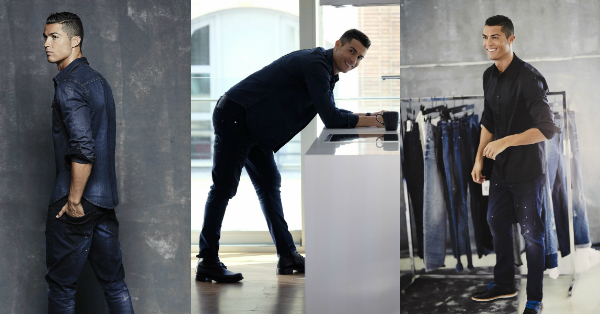 Cristiano Ronaldo has recently entered a Uniti Fashion, a global leader in sourcing and manufacturing, to launch a brand new collection of jeans and denim shorts this week. Jackets and shirts will also debut during fall, later this year. And, Ronaldo himself has modelled in these fashionable numbers. In an interview, Ronaldo said that he might not take himself too seriously, but he is definitely serious about his work. So, when he got the opportunity to launch his own denim line, he did not want his products to be like those of the other lines available in the market. He further added that he has always liked the look of denim and it has always played an important role in his daily wardrobe, but it frustrates him how heavy and uncomfortable the material can feel when an active person is constantly on the move. He also mentioned that when Ronaldo is not on the field training in his team gear, he is seen in a pair of jeans. he is naturally drawn towards grabbing denim products when he is out the door. He thinks it is versatile, comfortable, and effortless. So, when it came to clothes, denim was a choice he did not think twice about. He wants CR7 Denim to be a solution to the struggles he has had in trying to find a stylish pair of jeans that would be comfortable at the same time. He wants to his personal style elements to be used in his collection. For instance, he loves white, and his favourite colour is being used in the signature rivet which is on every pair of jeans. He considers the collection very personal. He is at the top of the list of highest paid athletes in the world and has been there for the last two years. He had an earning of $93 million this season, with $35 million earned from the sponsors like Tag Heuer, Nike, Abbott Labs, and Herbalife, and also from his brand, CR7, which include shoes, underwear, fragrance and even a line of hotels. Ronaldo has been expanding his CR7 empire for some time now, and his newest addition is the first denim collection designed for men, i.e. CR7 Denim. Ronaldo’s denim like will be launched at CR7.com in the United States and will have retail partners lined up in Europe. The collection will begin at $79 and go as far as $144.