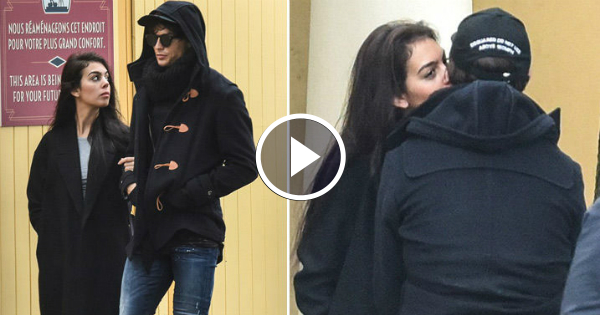 Cristiano Ronaldo’s current romantic interest is the gorgeous Georgina Rodriguez, the 22-year-old former employee of international fashion brand Gucci. In the past few months, this sultry siren has hit the headlines, being seen with football’s biggest hottie. Apparently, the two have been dating for several months, before they were first seen together in November 2016 at Disneyland in Paris. And. here’s a video in which Ronaldo Kisses Girlfriend Georgina Rodriguez in Disneyland Paris! Take a look.

A few weeks ago, Rodriguez was spotted celebrating her birthday with Ronaldo. In most of the recent matches of Ronaldo, she has been seen enjoying a good show on the field by her boyfriend. She has also never left his side at the important award ceremonies – the dynamic duo has sizzled the red carpet together. They were also seen taking a skiing trip, though they had to cut it short. All in all, we can say that the two are having a gala time together. And, this girl has also been seen with Ronaldo’s son. Does that mean that things are getting serious between Ronaldo and Rodriguez, considering he has introduced her to the life of his little boy? Ronaldo has had several women in his life so far. Each of them is drop dead gorgeous; and why not? Ronaldo is the most eligible bachelor in the world, and all women want to be with him. It’s natural that he can pick the best among them as his perfect match. Sadly, these relationships have failed – quite badly, if we may add. Even the other of his son has no trace in their cozy life. But, while the relationship has lasted, Ronaldo has made it visible to the world. He, after all, wears his heart on his sleeve. And here’s the perfect example of how Ronaldo shows his love for Rodriguez in front of the whole world, as he kisses her at Disneyland! All we can do is wait and see if this one goes to the next level!