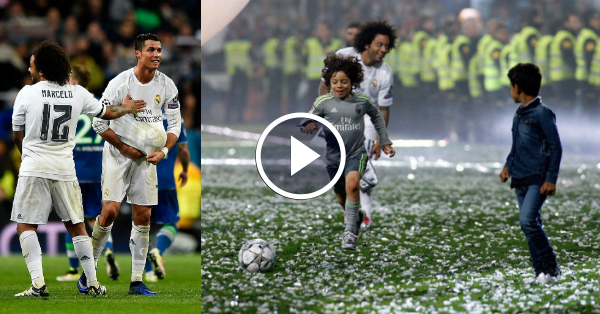 We have always seen how Cristiano Ronaldo and Marcelo have shared incredible chemistry. They two have made great soccer partners on the field, understanding each other’s temperaments perfectly. They have helped each other achieve tremendous goals. They have together made huge contributions to their team. Undoubtedly, Ronaldo is one of the greatest players; and Marcelo has played his part in his career. They are a delight to watch, in every match. But, have you seen Ronaldo’s son play with Marcelo? This year, Cristiano Ronaldo, amidst all the cricitism by media and his haters, has made extraordinary displays. He has helped his club achieve two great titles, the La Liga and the Champions League. During the Champions League 2017 final match, Ronaldo scored two great goals. This victory, after the La Liga win, was a great reason for Ronaldo and his team to celebrate. And celebrate they did, in the most glorious fashion, amidst chanting fans. But, the celebration gave another visual treat to the fans present, as Ronaldo’s little boy showed that he has inherited the football genes. Cristiano Ronaldo jr. started playing football, slaying his little opponents in white. And then came his father’s most trusted partner on the team, Marcelo! The Brazilian national player was seen sharing a few moments, tossing the ball around the ground with Ronaldo’s brilliant son, in the presence of everyone in the ground and audience. What’s incredible is that the little boy had no fear in handling the ball with his father’s friend, one of the greatest players the world has seen. Marcelo, on the other hand, obliged by playing with his friend’s son.

You have to agree, this is one of the most adorable moments in football! Watch the video and witness it!