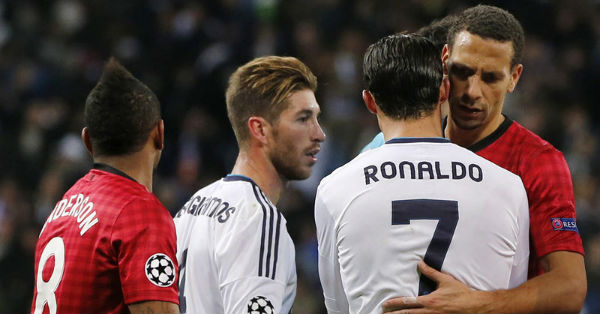 Ex Manchester United defender says at the time Cristiano Ronaldo moved to Manchester United from Sporting Lisbon he was something like show pony. Ferdinand experienced first impression of Cristiano Ronaldo during a pre-season friendly against Sporting Lisbon in August 2003. Rio Ferdinand was so impressed with the Portuguese International display that he suggested Sir Alex Ferguson to make move for him. The England International closely witnessed the development of Cristiano Ronaldo from an aspiring talent to a world-class footballer.

“I always felt from the moment I set eyes on him at Sporting Lisbon when we played against Ronaldo in a friendly.

“We all came off and went wow that this lad has potential to go on and be a World-class player, definitely. But I didn’t think  he would go on and be this machine in terms of goal. “Cristiano Ronaldo scores goals at the rate that has been never seen before, him and Lionel Messi.

“He was a show pony a little bit but now he just goes on pitch for the pure purpose of scoring goals.”

Cristiano Ronaldo spent six seasons at Old Trafford, after Manchester United completed the signing of Sporting sensation in the deal of £12.24million. During his time at Manchester United he scored 192 goals in  292 appearances, while helping the Red Devils to win three Premier League titles and Champions League in 2008. He signed for Real Madrid in 2009, when Spanish giants smashed all the transfer record by splashing £80 million to get their man. Since moving to Santiago Bernabéu, Cristiano Ronaldo has scored 324 goals in just 310 matches to become the all time top-scorer in the club history.