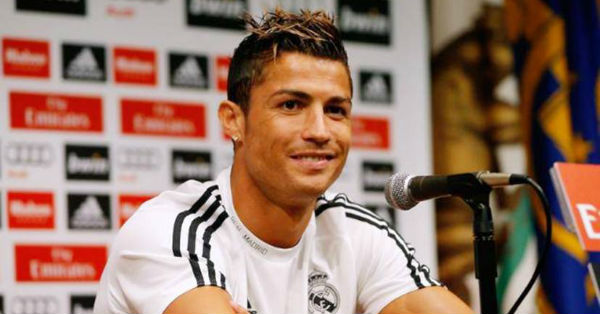 He is known to be outstanding with his skills around a football,but that is not where the Cristiano Ronaldo magic stops existing.The Madrid superstar is just as sharp when it comes to impress you with his tongue as well.

It would probably have sounded somewhat rude if someone else had remarked it,but when Ronaldo says that “I feel bad only when I play badly. Fortunately, that happens rarely.”,it’s almost as if he owns the words.His fees are almost part of grossly hyped folklore usually,but he is down-to-earth enough when he adds modestly,”I don’t smoke or drink, and I’m not a big spender, I live in a rural part of Cheshire and my nearest neighbors are squirrels, birds and cows.”,quirky enough to say the least. When asked about the secret behind his almost ethereal skill of perfectly netting a free-kick,Ronaldo was prompt enough to counter the question,”My free-kick secret? I just look at the net and say, “Take the kick, Cristiano!””,brimming with confidence that only suits CR7.But then again,just to vouch for the dynamic enigma he is,he is heard saying,“Of course the club can pay 94€ million for me. Or more. I think I’m worth more.”,and that’s strongly vocal Cristiano Ronaldo for you.If you think the modesty is somehow defied,hold on before you hear this,“I am not a perfectionist, but I like to feel that things are done well. More important than that, I feel an endless need to learn, to improve, to evolve, not only to please the coach and the fans, but also to feel satisfied with myself.” A few more notable quotes from Ronaldo can be remembered as well.

“If I didn’t become a football player, I would have become a superman”.

“I feel I have grown up. I am a man. It’s important in my football too. When everything is good, I don’t think you grow up fantastically, I think maybe you need a few problems to grow up.”

“I don’t think about one trick or the other, they just happen.”

“Some fans keep booing and whistling at me because I’m handsome, rich and a great player. They envy me.”

Well,fame begets envy.And as long as the name in question is Cristiano Ronaldo,buckle your seat belt,because the magic never seems to cease.