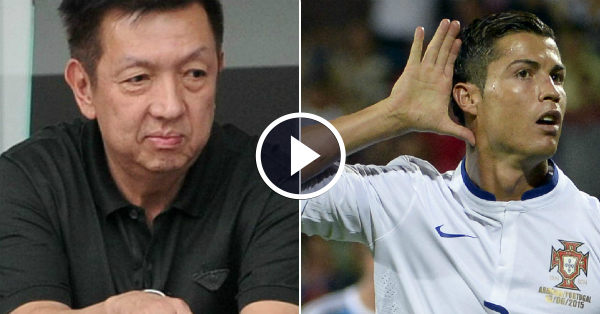 Cristiano Ronaldo was just spotted dropping in at a hospital in Singapore on Friday. He was there to visit Valencia owner Peter Lim, whose daughter, Kim, just became a mother. There were hundreds of fans waiting to greet the player, and they hogged him for autographs, as the Real Madrid star arrived at Thomson Medical Hospital where Kim gave birth to a boy. The Real Madrid player is known to be close to Lim, and is also in a professional relationship with him. Back in 2015, Lim purchased six years worth of image rights for Mint Media, which is a company that the Singaporean businessman owns. Lim is also linked with Manchester United, the English team in which Ronaldo formerly played, and is the co-owner of Salford City, along with the Red Devils legends such as the Neville brothers, Nicky Butt, Paul Scholes, and Ryan Giggs.

It is believed that Singapore is a stop for Ronaldo on his way to China, and he will be signing a new endorsement deal with Mint Media. He will also be attending events in Shanghai and Beijing. The player was in Singapore back in 2013, when he attended a promotional event for a charity of Lim, at a secondary school. Ronaldo was there as the motivational speaker. Before Ronaldo left for his trip to Singapore, Ronaldo was enjoying a long holiday with his loved ones in Ibiza. His holiday began late, since, after securing the La Liga and Champions League titles with Real Madrid, he went straight to Russia, to represent his national team Portugal. He went back to join his family after Portugal got knocked out of the tournament in the semifinal round. Ronaldo is expected to be back to his club in August. Real Madrid, at the moment, is in Los Angeles, for their pre-season tour in the US. The first pre-season match of Real Madrid will be on the 23rd of July in Santa Clara, California, and then move on to some glamorous matches against Manchester City, Barcelona, and Major League Soccer All-Stars whose squad has recently been declared. Here’s a quick look at the video clip of Ronaldo arriving at Singapore, and being hogged by fans!

Excuse the shaky shots, we expect nothing less than crowds of excited fans when @Cristiano Ronaldo is in Singapore! pic.twitter.com/xCplD53yml