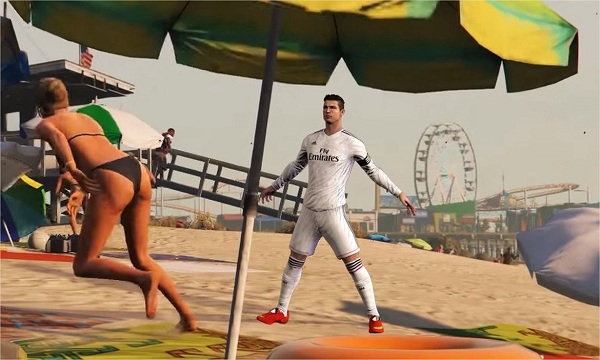 Well, how many times have you seen someone say if “I were Cristiano Ronaldo….”. Wishing to be the best player of the world is one thing, but making it happen is whole new level of crazy. And apparently some lads have done just that. Not in the real world but in the world of GTA 5. What would you do if you had Cristiano Ronaldo in GTA 5? would you try and find a soccer stadium? or do street football skills?

‘TheFifa11Vidoes’ have come up with this sensational video in which the Super star of football is seen in GTA 5. Ronaldo is seen scaring local with his signature goals celebrations. His football skills are as awesome in GTA 5 as in real life. Ronaldo dribbles at different locations in the video and he even hits a passing motorcyclist with his perfectly timed shoot. The player is shown driving around fancy car with Real Madrid stickers on it, having a Pirlo like hair cut, taking selfies, visiting the club and all kinds of typical GTA stuff. One has to admire the creativity of the makers of the viral video. Lets hope that once next version of GTA is released, the include Ronaldo and other football stars as an added feature. Controlling your favorite stars in your favorite  sport, Now that would be some entertainment.