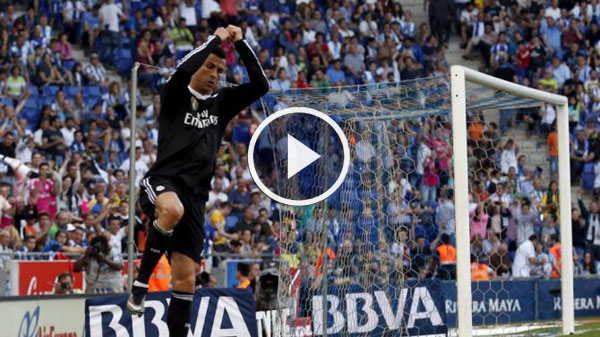 Cristiano Ronaldo‘s seventh hat-trick took his tally for the season to 45 league goals.

Real Madrid desperately needs the win in the La Liga clash against Espanyol to keep their hopes of domestic proud alive at the Estadi Cornella-El Prat. The Espanyol on the other side was also desperate to achieve a decent score to end their final home game of the Spanish League. The game had a sharp open after kick-off as Real Madrid tried their best to keep their pace from the starting.

Real Madrid started to produce some neat attacks since the start of the match as they almost cleared it on the 13th minute when a ball by Carvajal was landed perfectly in front of Cristiano Ronaldo which he missed for a slight miscalculation. But Real’s midfield was not up to the mark as Isco appeared a little weak. Marcelo, with his full spirit, tried his best to cross the ball to CR7 desperately as he knew who will decide the fate of the match. The first half was ended with no goals for each side but the spectators witnessed some marvelous moves from both the teams.

After the match started by the half-time-blow, Real came up even stronger than the previous half of the match. Marcelo started proving his skills while finding space on the left wing to deliver cross for Benzema. Cristiano Ronaldo got a chance of free-kick less than 25 yards but lashed horribly wide of the target. James also has a close chance to open Real’s scoresheet at the 58th minute which flies just a few inches wide of the Espanyol post.

The first goal of this match and also for Real comes on the 59th minute as Pepe delivered a nice ball to Benzema. Ronaldo takes one touch before looking up and firing past a helpless Casilla. After 10 minute of solid gameplay, Espanyol strikes this time on the 70th minute while Christian Stuani made an exceptional finish of the unnecessary back-pass by Pepe into Navas. The adrenalin rush was increased as Espanyol again produced a nice chance at the 77th minute. Just some 2 minute later, the Brazilian full-back Marcelo grabs his first goal of the La Liga season to give Madrid its needed boost.

Carvajal was substituted by Nacho at the 82nd minute while Cristiano Ronaldo looking to seal the game shut. He proved his talent by scoring again at the 83rd minute in a nice open produced by Hernandez. Hernandez successfully dribble past two of the Espanyol’s defender and took his shot but the ball broke into space where Cristiano Ronaldo is free to burst forward. The match came in favor of Madrid as Real secured their win with their fourth and the last goal of the match.

At the last minute of gameplay, Nacho tried to leave his name on the board with an aggressive drive that flies just inches wide of Espanyol’s post. After a brief changes of ball between Madrid’s players, Cristiano Ronaldo strikes again during the first minute of added time. He bags a hat-trick while gambling at the back-post to climb highest and head past Casilla. That was a beauty by the Portuguese national but the wonderful performance going to have no impact on the outcome of the Liga BBVA standing. Real successfully defeated the home team Espanyol by 4-1 and the viewers all over the world witnessed extreme showcase of talent by Cristiano Ronaldo.