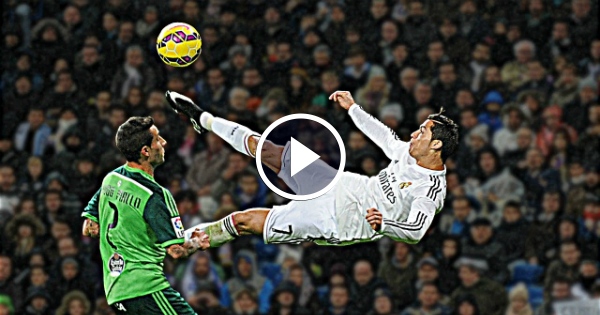 Cristiano Ronaldo Goals in Finals for Real Madrid since 2004 [Video]

As one of the greatest goalscorers of all time, Cristiano Ronaldo has made some incredible displays on the field. He is no ordinary scorer. He knows how to make a show out of the shots he makes, and to leave the audience in awe with him. That’s what makes him an incredible player, and a living legend. Cristiano Ronaldo’s current form and recent performances have proven that he is at the peak of his career. Only last year, he earned himself the Ballon d’Or, after his incredible performances, and this year, it is among the top contenders. While critics and haters have tried to prove that Ronaldo is in decline, the truth is that he has several more years of football left. And, already, this amazing player has had his name written in the pages of this sport’s history. Yes, Ronaldo is undoubtedly one of the greatest soccer players the world has ever seen. And, his goals are among the reasons why he is at such a place.

Cristiano Ronaldo Goals in Finals for Real Madrid since 2004 [Video] He has scored some incredible goals for Real Madrid, and a large number of these goals have been scored in the finals of various series; they have even contributed to his teams’ wins. The first of his goals in the finals was scored in the FA Cup Final 2003-04, where his team played against Millwall. It was a beautiful header, and with this goal began his saga of brilliant goals. Over the years, he has scored the most amazing goals that have left the world of football enthralled, his opponents shocked, and his fans in great joy. He has destroyed his opponents, and even the best of players have lost all power in front of him. He has grown over the years to become a powerful player to face. His most recent performance has been in the Champions League final this season. The final match was played against Juventus, and Ronaldo scored two goals in the game. His goals set his team up for a brilliant victory, as Real Madrid lifted the trophy. He has taken his immense form displayed for his club in the one match he has played for his national team, scoring two goals in the World Cup Qualifier match against Latvia. Take a look at Ronaldo’s incredible goals for his club in the finals he has played in!