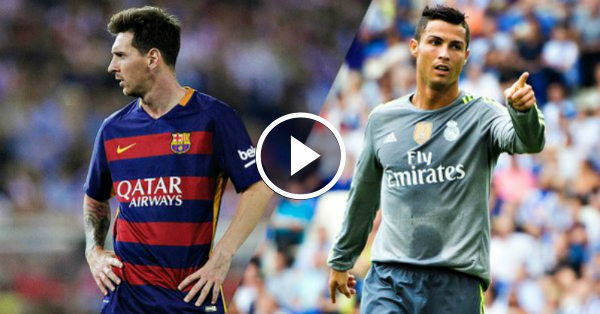 The rivalry between Cristiano Ronaldo and Lionel is one of the greatest in the world of football. The two living legends from Portugal and Argentina respectively are pitted against each other, and for good reasons. As the representatives of Real Madrid and Barca, the two biggest rival clubs of all time, they are bound to be pitted against one another, besides the obvious reason: that they are the top two players in the world today. We have seen Ronaldo and Messi play against each other a number of times, to defend the honour of their respective teams. The fans, haters, media and people in the gallery wait to see some thrilling moments between the two players. And, Ronaldo and Messi never fail to hold their end of the bargain. They show great displays against each other, and try to surpass each other’s achievements. They have beaten each other on the field many times. Ronaldo has displayed great power over Messi a number of times! Yes, there have been several instances when Ronaldo has destroyed Messi completely. Yes, Ronaldo has humiliated and defeated several great players, and Messi is no distinction. Yes, there are always ups and downs in a player’s performance, and nobody can claim that Ronaldo has always defeated Messi. Nor can anyone, other than the blind fans who don’t understand football claim that Ronaldo is better than Messi, because such a claim is not possible. Every season, the two players give their best to show that they are at the top. Ronaldo’s performance throughout the 2016-17 season has made the player one of the top contenders for the prestigious Ballon d’Or award. In fact, it is most likely that Ronaldo is the one who will bag the award, based on the titles he has helped his team to secure, i.e. La Liga and Champions League. On an individual level, however, Messi has scored more goals in the season, though he has also appeared in more matches. In any case, even if the individual goal scoring percentage of Messi is more, it is not just personal achievements of a player in a season that are taken into consideration for the Ballon d’Or. Altogether, Messi so far has 5 Ballon d’Or awards, and Ronaldo has 4 of them. As the world waits to see who wins the award this time, fans cannot get over how many times Ronaldo has destroyed Messi on the field, because, to a sports fans, it is the moment on the field that matters, and not the number of awards by a player.