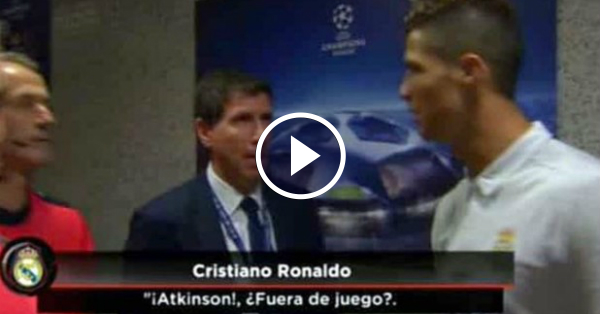 Real Madrid star Cristiano Ronaldo confronted referee Martin Atkinson in the tunnel over his ‘offside’ goal against Atletico. His maestro hat trick brought down city rivals Atletico and put the dominant European Champions on the very edge of a third final appearance in the space of four years affability of a 3-0 first-leg triumph.

As Sergio Ramos conveyed a high cross from the right of the Atletico box. Ronaldo was plainly in the offside position, before running back to place himself into an onside position. As Atletico cleared the threat, or so they thought.

Real midfielder Casemiro mis-hit the bounce back towards goal. And as the ball circled up, it enabled Ronaldo to head the ball practically through the Atletico goalkeeper, Jan Oblak. And put into the net to open the scoring. Ronaldo praised enthusiastically, however, once it was clarified at half-time that pundits were proposing he ought to have been hailed offside. Ronaldo took matters into his own particular hands to guarantee his goal was not discolored at all.

As the two sides come back to the Santiago Bernabeu pitch for the second half. Cristiano Ronaldo confronted referee Martin Atkinson in the tunnel and said:

“Atkinson!” Ronaldo can be heard to yell in a video caught by a passage camera for Antenna 3. “Did you see?” Atkinson answers: “At first you were [offside], yet then you didn’t… “

Cristiano Ronaldo quickly interrupts on Atkinson to include “however I didn’t meddle,” before the ref concurs with him and the combine take off for the second half.

The video is an unmistakable exhibit of Ronaldo’s mind boggling yearning to guarantee that nothing is withdrawn from him.

Given his remarkable goalscoring record in Madrid,, it is no big surprise why he will go down as one of the greats. However, it is pleasant experiences like this one that offers a look at the attitude of one of the football’s most prolific goalscorers.