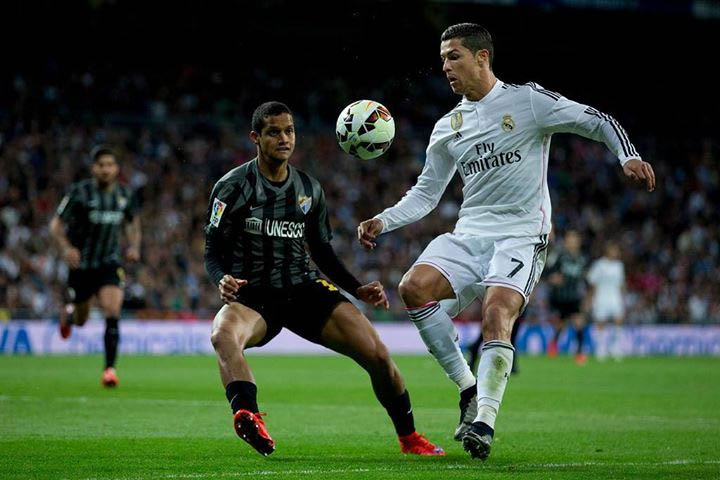 Cristiano Ronaldo had an eventful match during Real Madrid  3 – Málaga CF in La Liga 19-4-2015.
A missed penalty, and the late goal and a sensational NUTS!

here are the some of best photos from the match. hope you will like them.

Cristiano Ronaldo scored his 50th goal of the season and 216th goal in La Liga Career to help Real Madrid beat Malaga and move to within two points of La Liga leaders Barcelona.
Cristiano Ronaldo crossed for Sergio Ramos to put Real Madrid ahead but then hit the post with a second-half penalty.
Ronaldo was involved again as James Rodriguez made it 2-0.
Ronaldo, 30, made it 3-1 from Javier Hernandez’s low cross and has now hit 50 goals in his last five seasons.

Barcelona had moved five points clear at the top with victory over Valencia earlier on Saturday and Madrid were made to work for their win by a Malaga side chasing a Europa League spot.
The triumph came at a cost as Gareth Bale and Luka Modric were forced off by injuries.
Wales forward Bale limped off in the fifth minute, while Modric was replaced after an hour. ( report BBC )