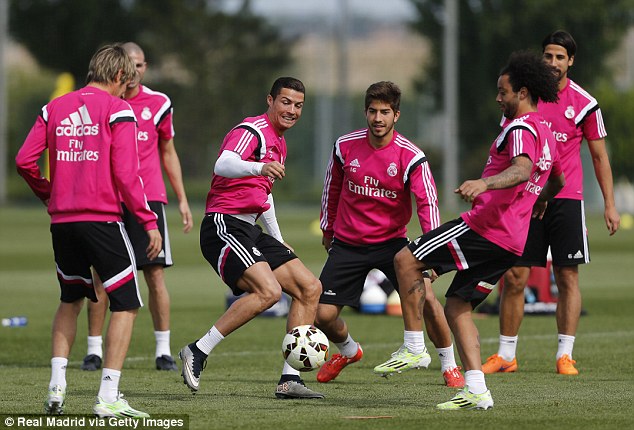 Real Madrid players were put through their paces during a training session ahead of this weekend’s league clash with Celta Vigo.
Cristiano Ronaldo and Co could find themselves five points behind Barcelona, should the leaders defeat Espanyol in the derby on Saturday, before arriving at Balaídos on Sunday evening.

Stars including Ronaldo, James Rodriguez and European match winner Javier Hernandez were in high spirits as they honed their skills under manager Carlo Ancelotti’s watchful gaze.
Gareth Bale was a notable absentee from training as the Wales winger continues to recover from a knock, although he does expect to be available in ‘a week or so’.
Speaking of the upcoming clash on May 5, Bale said he would have chosen to be drawn against the Serie A champions if he had his pick: ‘It is going to be a difficult game, but if you had to choose a team you would have probably said Juventus.

‘We know it is going to be just as hard a game as the other two and we are going to have to be fully committed to get to the final again. We are happy and looking forward to the semi-finals now.’

Los Blancos are aiming to become the first team to retain the trophy in the history of the Champions League having claimed an elusive tenth title last term.

Speaking of ‘la decima’, Bale said: ‘We spoke about it last season and said if we win it this season there would be less pressure, but now the fans want the number 11 just as much as the number 10.
‘They are very demanding of us here, we are going into the semi-finals feeling like we did last year hoping to win the Champions League for the second time in a row for the first time.’