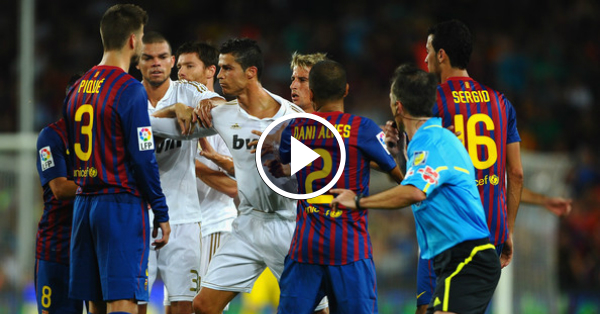 Cristiano Ronaldo is the star player of Real Madrid. No matter what the critics and the haters have to say, this is the truth. Even on his worst days, Ronaldo still manages to enthuse the team to do well with his mere presence. And anyone who follows international soccer knows that Real Madrid’s greatest rival is none other than Barcelona. The Real Madrid vs Barcelona rivalry, however, has a new name: Ronaldo vs Messi. Of course, performing well against Messi means doing well against the whole team. As a result, the world has seen some amazing performances. But, rivalries often lead to heated fights, and unfortunately, that has also led to some crazy fights of Ronaldo vs Barcelona. The legacy of the Real Madrid vs Barcelona rivalry is as old as club soccer. Soccer players across the world stay tuned for the matches between these two teams. And in the last decade, this rivalry has taken a whole new turn, with Ronaldo representing Real Madrid and Messi representing Barcelona. Real Madrid has many other amazing players such as Bale, Benzema, Marcelo, Ramos, Pepe, Kroos and the like, and the comparatively newer additions like Morata, Danilo and Rodriguez have been proving themselves time and again. However, the first name that comes to mind when we speak of Real Madrid today is that of Cristiano Ronaldo. Naturally, huge responsibility lies on the shoulders of the Los Blancos star. He is expected to do his best, and win matches for his team. And when it comes to matches against the team’s archrival Barca, it seems that the responsibility of the entire team is upon him. And, why not? It is a known fact that even his presence on the field can provide huge encouragement to his teammates. Even on days when he is unable to give great performances, he still makes his contribution with assists, passes or simply his presence. but, during these great moments, there have been some heated moments on the field, too. Missed penalties, denied goals, unfortunate passes, painful injuries, unexpected challenges – all these have led to many crazy fights, and Ronaldo, noted for his aggression, has often lost his cool.

Here are some crazy fights of Cristiano Ronaldo vs Barcelona, in some of the most incredible matches between the two rival teams; take a look: