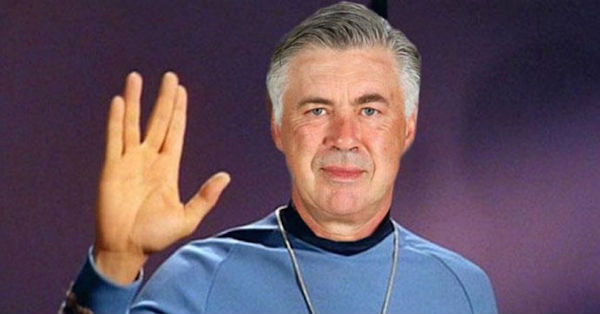 Few would deny that Carlo Ancelotti is a man of numerous talents.

After an outstanding playing career that included silverware-laden spells at Roma and AC Milan , Carlo has gone on to manage the Rossoneri, Chelsea and Real Madrid with great success – the mere fact that he’s overseen three Champions League wins in a decade vouches for the great managerial run he has had over the year, consistently so.

However, we weren’t explicitly aware of the fact that Carlo considers himself to be a bit of a thespian – not before now, at least. And mind it, he’s not just an amateur actor, either. If reports in his native Italy are credible enough to make an analogy out of them , the most sought-after manager in Europe is about to take on a weird and wonderful new job. Believe it or not, Ancelotti looks almost the right candidate to appear in new Star Trek film, ‘Star Trek Beyond’.

That’s right. Let that supposedly surreal news sink in. It’s been reported that he’s already excited about his scenes for the upcoming sci-fi flick, in which he reportedly makes a cameo as a space doctor examining an alien life form. Yes, seriously.

Although, we don’t think that a quick cameo is enough for a man of Ancelotti’s stature. Whether he’s a natural at acting or not, we want to see him in a star role – he’d make an awesome Spock in our opinion.

“I play the part of a scientist who has to examine an alien. It was good, I pretended it was Cristiano Ronaldo in front of me!” Ancelotti said.

Ancelotti has reportedly already filmed the scene in Vancouver after landing the role owing to his friendship with actress Zoe Saldana.

Saldana, 37, has starred in the latest Star Trek films as Nyota Uhura and it is believed the actress played a crucial role in Ancelotti’s surprise movie role.