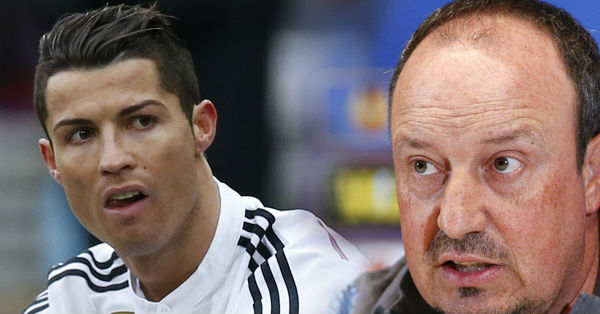 Real Madrid coach Rafael Benitez thinks that Cristiano Ronaldo skillfully took his team through all the way to bag a 3-0 league win over Levante on Saturday.

The Portugal international played a major role in Saturday’s encounter as he set up Marcelo for Madrid’s first goal, before scoring the second just minutes later to become the capital club’s all-time leading goal-scorer.

Jese eventually took it to three after the break and Benitez was prompt in acknowledging Ronaldo’s contribution, admiring the 30-year-old for carrying his team to victory while a number of other senior players were out forn today’s clash.

“Cristiano had to step up and take his responsibility, showing the team the way and he did just that,” the former Napoli boss said at a post match news conference. “We were missing a lot of players, but he carried the team.”

Benitez replaced Gareth Bale with Lucas Vazquez at the interval, leading to fears the ex-Tottenham star had suffered another injury problem after he missed out on a number of games for Madrid earlier this season due to a muscular problem.

However, the head coach insisted that his winger was merely rested as he had featured twice for Wales during the international break.

“I did not take Bale off because of some injury,” said Benitez. “He just needed some rest after an intense week with Wales.” Karim Benzema, Luka Modric and James Rodriguez are among the present stars absent through injury for Madrid.

Barely 24 hours after breaking Real Madrid’s all-time record, Cristiano Ronaldo was engaged in the gym recovering session ahead of a Champions League clash with Paris Saint Germain on Wednesday.

Posting a photo on Instagram on Sunday alongside the caption ‘Recovery’, the former Manchester United star could be seen toiling hard on a bike machine while his son Cristiano Jr kept a casual eye on him in the background.