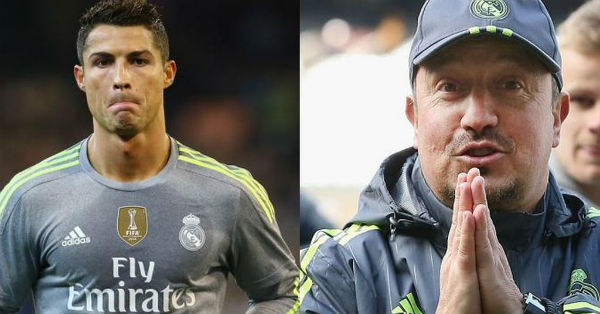 Rafa Benítez was interviewed on Onda Cero radio’s ‘Al Primer Toque’ recently. The second place holder of La Liga season 2015-16, Real Madrid’s manager Rafael Benitez was asked about several things related with his side ahead of the season.  The 55 year old, stated about not taking risks as far as players fitness is concerned.

He was asked on the following issues, players:

Injuries: “We don’t have as many as they say. Injury and muscle fatigue are not the same thing. The fans can relax. We’re doing good preventative work”. The atmosphere inside the dressing room: “I’m surprised by the number of stories they make up. We have a great dressing room and there is a very good, relaxed and healthy atmosphere amongst the players”.

Problems with players: “I don’t have a problem with any player in the squad. I had a good, long chat with Cristiano Ronaldo yesterday”.

Silverware: “I told my wife that this Real Madrid side can win the league and plenty more titles”.

Cristiano Ronaldo: “I’ve decided to say yes and yes whenever I’m asked whether Ronaldo is the best player I’ve ever coached”

Real Madrid’s game: “Defensive and orderly do not mean the same thing. Real Madrid are an attack-minded team, but you concede fewer goals if you maintain order. I’ve broken goalscoring records with several teams”.

Benzema: “We’ve got Benzema back at his best, although he still receives lots of criticism. We’re rationing his playing time”.

The derby: “If we forced the best Atlético side to make three panic substitutions and avoided conceding four goals like we did last year, we must have done something right”.

Ramos: “I fought more than anyone for Ramos to stay. There are absolutely no problems between us. He’s our captain, an outstanding footballer and he has to keep showing that”.

Bale and Ronaldo: “Coaches have to control a group of professionals but not what their agents say. Ronaldo and Bale don’t have any problems”.