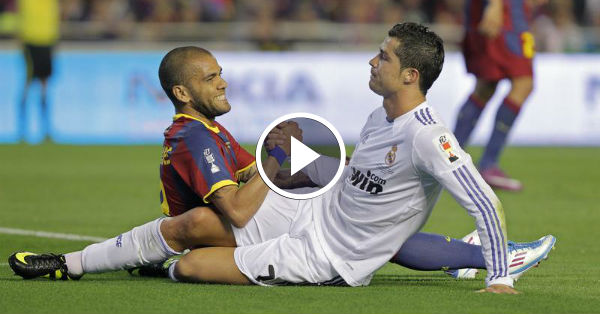 It was one of the most one sided affair between Real Madrid and Barcelona in the recent history of El-Clasico, with the visitors cruised to the victory with the emphatic scoreline of 4-0. While home fans jeering put more pressure on Cristiano Ronaldo and Rafael Benitez even president Florentino Perez couldn’t avoid their anger.

But Dani Alves said that he can understand the reaction of Real Madrid fans because when you lose this bad, big players  like Cristiano Ronaldo get criticized:

“He is still Cristiano, a top quality player. Perhaps that is the problem.

“How can I say this? he is such a character, he likes to be he protagonist. If you want to be like that, when you win they speak about you and put you in the limelight, but when you lose you have to take the blame. “If the team doesn’t get the things right or win it is going to be your fault.

“But we have enough to worry about ourselves without Cristiano. To be honest I don’t care what  Cristiano does.

“I don’t care what happens to Real Madrid as long as we are doing well. It is competition and if your opponent is weak, you need to be strong and make sure they don’t have an option.” The Brazilian International further commented on a win against Real Madrid:

“It is not over problem. The secret is to have a good team, on with balls, personality and ambition and that is we have.

“They approached the game in the way to attack and counter us, but we were cleverer. We played a better game and our understanding of game was better. “