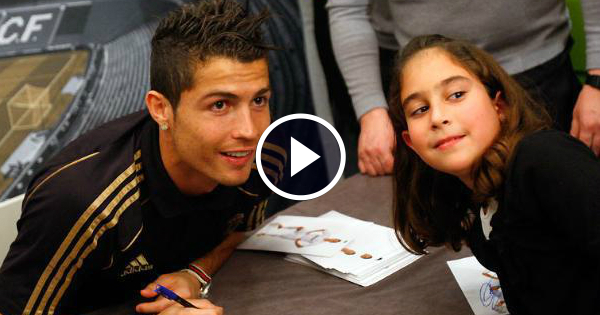 A girl fan who kissed Ronaldo and became the happiest person on earth!

Everybody wants a piece of Cristiano Ronaldo. Be it the best clubs who want to sign him or the top brands that want him to promote them. But, the people who want him the most are his fans. Just a handshake or a selfie with CR7 is enough to make their day. And here’s a girl fan who kissed Ronaldo and became the happiest person on earth!

A girl fan who kissed Ronaldo and became the happiest person on earth! We have seen how Ronaldo gets hogged by the people on the streets. The poor sound can’t have a cup of tea in peace, because people will just not leave him alone. Whenever Ronaldo has to step out of the house, he is always stopped by his fans who want a selfie, a photograph, an autograph or a hug from him. Ronaldo obliges. The same thing happened when he was in a car, and got stopped by a host of fans. They came to him with the same old requests. And Ronaldo, in all his glory, waited patiently and delivered all that he could. Because Ronaldo loves his fans, and knows that whether he is at his best or his worst, it is his fans who make him so famous. At the end of this little interaction came a girl who had been waiting after taking a selfie with him. Just as Ronaldo was about to drive away, this girl stopped him again and placed two peck on Ronaldo’s cheeks. You’d think Ronaldo has gotten used to all the attention, but as the girl let go of him, Ronaldo was clearly blushing. Now, isn’t that cute? Perhaps many such interactions and exchanges will happen in Ronaldo’s life, but the girl fan was probably on cloud nine after the rare meeting with the world’s favourite soccer player. And we have to give the credit to Ronaldo for giving a brief but memorable moment to yet another fan. After all, which girl can exist on earth who does not find Ronaldo irresistible? This girl surely had a moment that she will remember for a long time, and talk about to her friends. And that’s the thing with Ronaldo. He gives them a moment to remember his kindness and warmth. Here’s a video of the moment of Ronaldo and his female fan. Take a look!