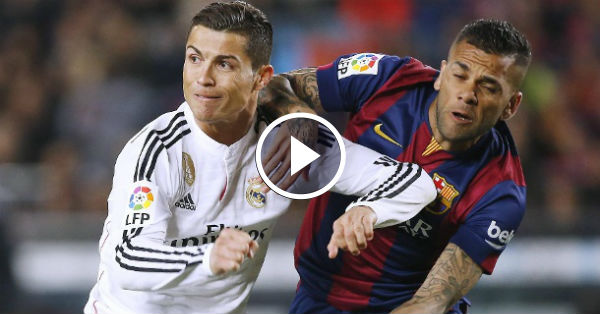 During El Clasico, is there any intentional clash between Cristiano Ronaldo and Dani Alves?

Dani Alves and Cristiano Ronaldo got into it in the first 50% of the ‘El Clásico’. In one of the incidents when they met up, the Brazilian attempted to run the forward off the ball and Ronaldo responded by elbowing the Barça full-back in the head. Official, David Fernández Borbalán’s just reaction was to indicate Alves a yellow card for impeding Ronaldo’s run.

Watch the video of the clash between Cristiano Ronaldo and Dani Alves:

There was a touch of discussion during the first half of Saturday’s Clasico match between Real Madrid and Barcelona, as Los Blancos star forward Cristiano Ronaldo struck Barca defender Dani Alves in the head with his elbow. The Brazilian full-back Alves moved to square Ronaldo’s way to the ball, keeping in mind the recent didn’t appear to be going for his head, he likewise unmistakably didn’t keep down. Actually, fans and savants on both sides of the competition instantly said something regarding the matter. The folks of Barca side were persuaded it was a planned elbow that may have justified a red card but referee show the yellow card to Dani Alves. The elbow didn’t look pretty, however, Alves started the occurrence by submitting a reasonable check foul. Eventually, the official more likely than not decided the contact was coincidental, and without the advantage of moment replay, it would have been difficult to see the occurrence from where he was standing. Cristiano Ronaldo and Dani Alves were included in various occurrences amid the first half, including penalty yells when the last had his arms around the Portuguese. That was not really the main physical fight, in any case, as James Rodriguez was occupied for a tackle on Neymar on the edge of the case; Jordi Alba and Gareth Bale likewise made their vicinity felt.