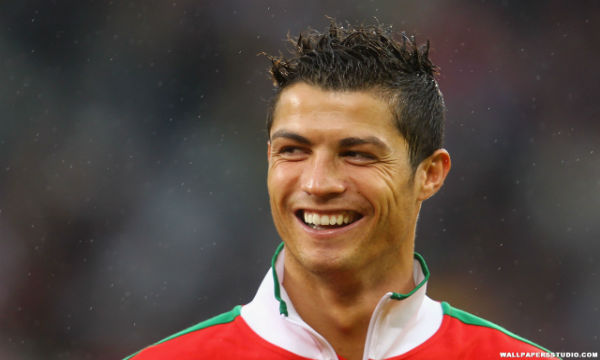 2- The second of the fun facts about Cristiano Ronaldo is that he can produce some of the best and fastest free kicks. The speed of his free kicks is 130 km per hour.

3- Ronaldo is a very hard working player and he works out regularly. His body shows it. He lifts about 23,055 kg weight in gym in only one training session. And that is a lot.

4- Ronaldo possesses amazingly fast feet which can leave defenders in dust in a matter of seconds. How did he got such fast feet? Well, talent is one thing but he worked hard to improve his talent. He used to skills by attaching weights to his legs and then training. It surely made him fast.

5- Ronaldo is known for his kindness. He cares a lot for his fans and there are several instances where he would go to the crowd and give his signed shirt to someone who got hurt because of his free kick, or some kid who was crying badly to take a picture with the super star.

6- Many sports stars these days have tattoos on their bodies. Ronaldo does not have any tattoos on his body and he regularly donated blood.

7- Everyone wants to have abs like Cristiano Ronaldo but is everyone ready to work as hard as him to get those abs and that awesome physique? Well, to maintain that amazing physique Ronaldo does about 3,000 abs daily. That’s what it takes to have such a spectacular body.

8- Cristiano Ronaldo takes amazing headers and jumps very high to score on corners and crosses. He reaches height of 44cm while taking jumping headers, and it is more than the average professional basketball players.

9- There is a museum dedicated to Ronaldo in Funchal, Portugal. The name of the museum is Museu CR7 and it has some rare photos, trophies, medals and other interesting items related to Cristiano Ronaldo

Hope you liked these fun facts about Cristiano Ronaldo. Enjoy more information about the legend in other articles on our website.